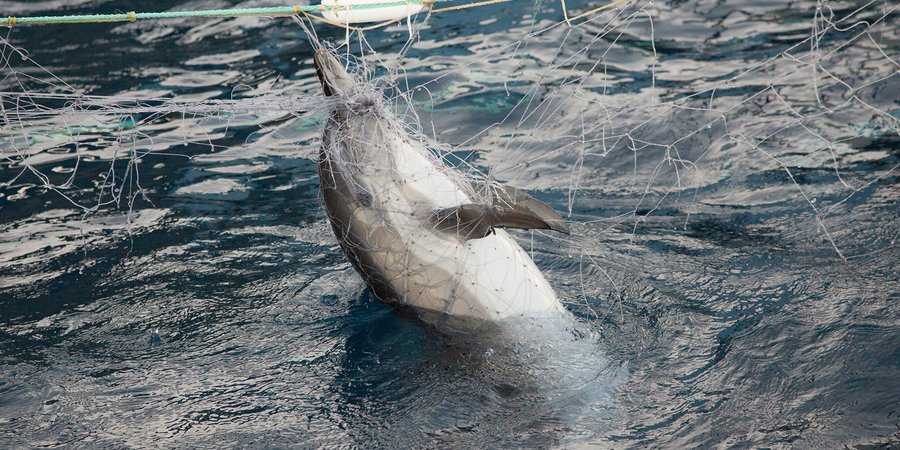 22 European organizations, led by Whale and Dolphin Conservation, ClientEarth and Seas At Risk, have jointly called on the European Commission to take legal action against 15 EU governments (including Spain), for failing in their legal duty to protect whales, dolphins and porpoises in the North East Atlantic from capture in fishing nets (bycatch).

This complaint has been motivated by the high mortality of dolphins recorded last winter, when there were about 1200 dolphins washing along the French coastline, most of which had signs of accidental bycatch.

Spain is one of 15 countries that has been denounced by 22 organizations across Europe [1] for not fulfilling its obligation to protect marine mammals from their capture in fishing nets. The groups have sent two letters to the European Commission, one requesting for emergency measures to immediately prevent further deaths [2] and another one asking to take legal action against those governments [3].

For the organizations signing the complaint, the cetacean bycatch situation in the North East Atlantic is very serious, and particularly critical for some dolphin and porpoise populations. The short-beaked common dolphin in this area has suffered high bycatch for decades, as evidenced by the stranded dolphins washing up on the coast of Ireland, United Kingdom, France and Spain. This culminated this past winter in 1200 dolphins washing along the French coastline alone, over 80% of which were diagnosed as having been bycaught.

These numbers are just the tip of the iceberg, for each dolphin body landing on a beach, many more decay at sea. The scientific community warn that commercial fisheries are now a major threat to this dolphin population. To prevent thousands of more deaths next winter, the responsible fishery should be closed.

In the joint complain, the groups also call for emergency protection measures to be brought in for Baltic harbour porpoises, as this specie is classified as Critically Endangered in the IUCN Red List, with only a few hundred left. One single incidental killing of a fertile female could have a devastating impact on the ability of the population to recover.

Among other aspects, the complaint is based upon none of the countries involved are doing enough to prevent the killing capture or disturbance of these marine mammals by fishing fleets. Under the EU’s habitats directive, these countries have an obligation to ensure strict protection for cetaceans, that all fishing activities do not have a significant impact on their populations, and to monitor and minimise accidental capture. But each and every country is currently failing to comply with these directives. Furthermore, according to the law, EU seas should be healthy and thriving by 2020. With less than 6 months to go, the groups ask to the European Commission to take action and oblige Member States to take the necessary measures to protect the cetaceans and ensure a good environmental status of the marine ecosystems, as required by the EU law.